After rain overnight, the weather cleared for another dry sunny day. This was to be the dawn of the greatest day of cycling I’ve ever enjoyed in the UK.   The day started on gentle rolling terrain heading East into Kirkby Steven. Mellow riding in lovely sunshine. The gentle ripples of the landscape became ever bigger, just like the pattern of waves on a pond as you look towards where the stone plopped into the water. I was now on the same roads as the part of our extended Dales Cycleway but without any hint of rain this time. Then I came to Barras and what a mighty slope faces you when you leave the village on the Tan Hill Road. Last time it beat me, but this time I conquered! Once up the steep section it was then a really pleasant gentle climb all the way up to the highest pub in England. The views just got better and better as I climbed. I recalled slogging up here in heavy rain just a few weeks previously – what a difference some sunshine makes (I imagine the lack of a 20 kg trailer helped a little too). I was buoyed up by the time I reached the Tan Hill Inn and had worked up a thirst.

Suitably hydrated I headed up onto Arkengarthdale Moor which yielded a fabulous vista over Yorkshire to the West, whilst temptingly hiding the delights of Swaledale to the East. A satisfying flat section (possibly the last I was going to see before reaching Derbyshire three days later) the gave way to a sweeping descent towards the fabulously named Whaw – and phwoar! what a view greeted me there. 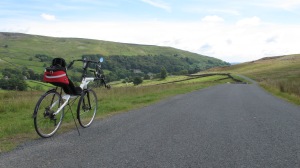 A cheeky little climb is all the stood between me and the steep drop into Reeth and my lunch spot – sat on the green in the sunshine alongside the support crew who met me for lunch. 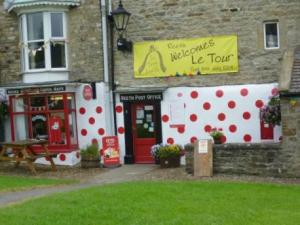 There wasn’t far to go now, it being a day it would not be practical to extend. You don’t just slip Coverdale onto the end of a day as an afterthought, well not unless you are Sir Bradley anyway. Next was [Côte de] Grinton Moor – one of the climbs on Le Grand Depart. I noted that the TDF route took the lower, easier road over the aptly named Wimp Hill… I took the route over the top on the Dales Cycleway, although admittedly I did have to stop for a puff on a few occasions on the way up. On a recumbent you have to spin up a hill, which is OK unless the hill is too steep for too long. A short section of 1:5 is OK, as is many miles of 1:8 but something in between can leave you anoxic. Once again, what was steep at the start settled out as soon as the first 10% was out of the way. How lovely to then freewheel down into Wensleydale, the home of Wallace’s favourite cheese and a chance to take Mrs W (and Junior) out to the Bolton Arms to celebrate our 8th wedding anniversary. And since this is apparently the ‘salt’ anniversary, chips were a cultural must. What a truly great day.

Monday saw me take the Metabike out of the road for only the second time.  It’s efficiency made it excellent for hill climbing.  1550 feet height gain over 27 mile route.  My inexperience at balancing a high racer led me to get off and walk on a couple of climbs – but that was mostly nerves.  The Metabike is the first time I’ve ridden a two wheeler clipped in.  I am amazed that I was able to do this route less than a week and only ca. four hours riding experience into getting the bike.  Having mastered all that, why is it I find it so hard to relax my shoulders though?  I came back with legs, ‘seat’ and wrists all without any strain or discomfort but stiff shoulders.  The ride is a little harsh, but only on a par with a Al framed standard tourer – this was pleasing.  Will I be able to stretch from 27 miles to 2 x 40 mile days next weekend… Watch this space.

Overspecified but not Overheated – Hilleberg Rogen in a Heatwave