Packing up was quick and easy after a night in a cabin, and the ride to the Ferry was all downhill. The morning started dry, but seemed very windy. Just how much so became obvious when we reached the shore and saw the white horses out on the Fjord, showing it was blowing at force 6. Thankfully the ferry was a hydrofoil which not only meant it was fast but also meant a totally smooth crossing over to Nordeide on the North shore. We passed a hamlet on other shore which could only be reached by boat.  Fascinating.

The rain started on the way over and was our companion until our mid morning shopping stop at Vadheim. Mrs W slipstreamed me all the way, which brings me to mention something odd. On a suitably laid back recumbent (even at my modest 33 degrees, rather than the radical 22 degrees of others, of which the Metabike is also capable) headwinds do not seem to make any noticeable difference. But still someone can ride behind me and benefit from my slipstream. Somehow this feels like getting ‘one up’ on nature with both of us winning.

Vadheim saw us turn onto the busier E39 and start the climb up to Ykslandsvatnet. There were extensive roadworks on the way up, with the road due to be straightened and having a tunnel added, seemingly to allow some dual carriageway. The road alongside the lake was very attractive, those going through the new tunnel will have drawn the short straw. Lunchtime in Sande was chilly but dry. I have no photos of the climb, but the ride was on a easy gradient and graced with very pleasant countryside. We continued to climb to Langelandsvatnet, which is apparently a popular swimming lake the summer. You would have needed a hammer and chisel to break the ice to get in though! Now at ca. 650 m we were exactly on the snow line.

Langelandsvatnet – A bit chilly for a dip.

The sun was now out and as we whizzed down the long and exhilarating downhill into Forde, our final destination for the day, the temperature started to climb again. Forde sat inside a bowl of hills, so it was clear how tomorrow ride would start.  It was a surprise to be in such a busy town with so much traffic. After failing to find signs to the campsite a little playing with the Garmin allowed us to navigate to the street on which the campsite was located. Once again we were the only tent on the site, so we could pitch where we liked. What I should point out now is that this was my birthday. Being in a large town meant access to a large supermarket – just a very short walk from the campsite which was handy. This meant the luxury of deciding what we wanted for dinner and buying the ingredients rather than seeing what was available and deciding what we could make from it.

Smoked salmon, cheese, broccoli, pasta and milk were obtained and over a starter of green olives dinner was prepared. This was my first time trying this truly one pan recipe and it worked out really well. In short the pasta was cooked in 1/3 milk, 2/3 water and then the liquor used as the basis of the sauce. Fine dining in the sunshine. 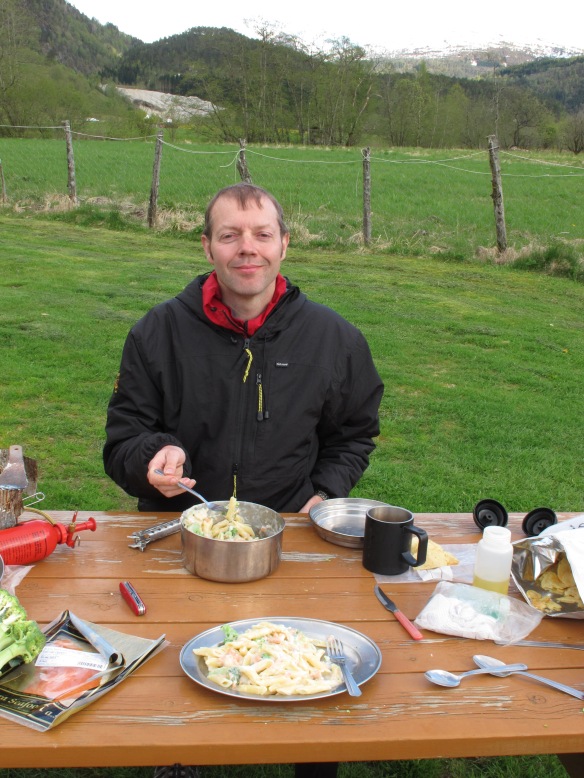